The two most recent concerts on the Ives tour marked a notable step in my musical journey. For the first time I was playing not for family friends back in Wilton or fellow students at Ithaca College, but for a general public that had no clue who I was. Luckily I found two wonderful, supportive venues: 171 Cedar Arts in Corning and Lake Street Presbyterian Church in Elmira. It was fun to venture out to these two cities and interact with storeowners as I tried to hang up flyers advertising the concerts. I spread my flyers far and wide, hoping for a good crowd.

In the end, attendance at both concerts was quite sparse, but it was a good reminder of how far I have to go and it got me thinking of new, better ways to promote the Concord Sonata. Despite the small audiences, I did meet one woman at the Corning concert who had the enthusiasm and encouraging power of 20 people! Her name is Barbara, she’s 84 years old, and she loves modern and dissonant music. She seeks it out. How rare is that? Barbara stayed to talk for a while after the recital and was just completely enamored with the piece and how Ives really captured a moment in American history and portrayed it in music. The next day she sent me an email with even more effusive comments about the recital. All it takes is one special person to make an impact!

Throughout all my travel through Corning and Elmira, I discovered a gem of a dive bar: Brady’s Pub (248 W Water St, Elmira). After a long day of hanging up flyers I thought I’d stop in somewhere for a drink and get a sense of the local flavor, and I was not disappointed. The beer taps were that rare combination of diverse and cheap, and Brady himself was bartending. Eventually a group of friendly regulars walked in, and I had some good talks about living in that area, the issue of gas fracking, and beer. I wish I had taken a picture, but I know I’ll be back. If I lived in Elmira, it would be the perfect place to watch sports, play darts, and just hang out.

Corning is also a charming place, from what I saw. These pictures were taken on a quiet Sunday with almost no pedestrians, but there’s a really nice downtown area with restaurants and shopping. 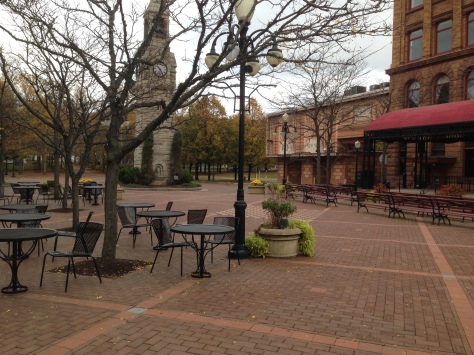 So now that these two concerts are over, the tour is on a bit of a hiatus until January, when I will venture out to Wheaton and Chicago. Until then, I’ll stay current with musical news and random thoughts. 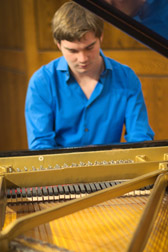